Utilising the key skill sets required by fighter pilots and those in command of the most advanced commercial aircraft, we can help you and your team deliver consistent world class performance.

PlaneTalks will work closely with you to create a memorable conference experience tailored to your individual needs. Keynotes range from those for the pure aviation enthusiast through to those aimed at organisations seeking to use insight from the aviation industry to sharpen their own business performance.
We are experienced at presenting to events of all sizes as well as facilitating more discursive sessions for smaller groups in a workshop style setting.

Learn How Get in touch

PlaneTalks offers development programmes for your business or team; helping you to build high performance cultures that work effectively within high pressure or safety critical environments.

Learn How Get in touch 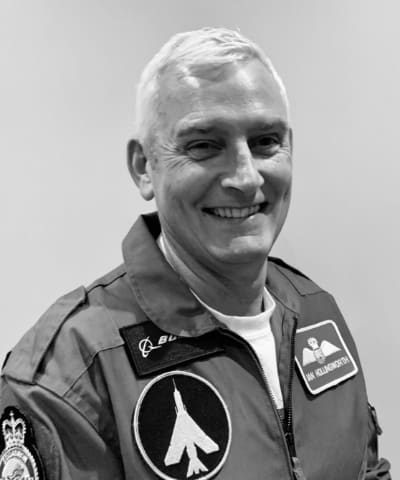 PlaneTalks was founded by Ian Hollingworth and he is the principal speaker. Ian is a highly experienced presenter, having appeared on TV and film for BBC, Channel 4, National Geographic and Smithsonian.

Ian is a former RAF Cold War fighter pilot and has operated aircraft types ranging from the Lightning to the Jumbo Jet. He draws on experiences of working with Boeing, British Airways, Emirates, and high growth emerging airlines in the Middle East and Asia.

Ian is a Fellow of The Royal Aeronautical Society

‘I have had the pleasure of working with Ian for over five years. During his time, he has inspired many students to follow their dream. Our offering is backed at high level by industry and by the military, and operates in both UK and overseas markets; clients range from aspiring students to military commanders, senior political figures and industry CEOs.  Ian is always ahead of his brief and can command any audience with ease. He comes highly recommended.’

‘Ian, I would like to formally record our gratitude to you for delivering a high quality product; it has made a considerable difference to our operation and is very much appreciated.’

‘Ian and his team apply their knowledge from real life experiences in aviation and make it real within other industries. They are extremely flexible, get involved and rapidly make an impact. Ian delivers high quality material and engages comfortably with individuals at all levels.
Thank you for a most valuable contribution to our programme’.

‘Ian, many thanks for delivering excellent material in an engaging and thoroughly enjoyable manner. Your extensive knowledge and experience was readily apparent; feedback is extremely positive and it was great working with you. I look forward to your return!‘

‘Ian, thank you most sincerely for an absolutely splendid and informative lecture last evening.
We all envy your time as a pilot of these wonderful aeroplanes!’

'Plane Talks. Many thanks to you all for your hard work, deep insight and feedback into Eticom. You have created clarity of vision and purpose for which we are massively grateful.'

We have worked with:

It's good to talk

Call today and see how we can help get your event or idea off the ground.

Your return on investment

What makes modern aviation work safely and effectively within a hostile environment?

Why does military aviation function at a high level; continuously, consistently?

How do military and airline cultures ensure that their teams do precisely as briefed 24/7?

If you wish to engage, PlaneTalks will offer the following process:

PlaneTalks will build a relationship with your business, from an understanding that it is your people who make the difference. For further information email Ian on ian@planetalks.com

Any cookies that may not be particularly necessary for the website to function and is used specifically to collect user personal data via analytics, ads, other embedded contents are termed as non-necessary cookies. It is mandatory to procure user consent prior to running these cookies on your website.